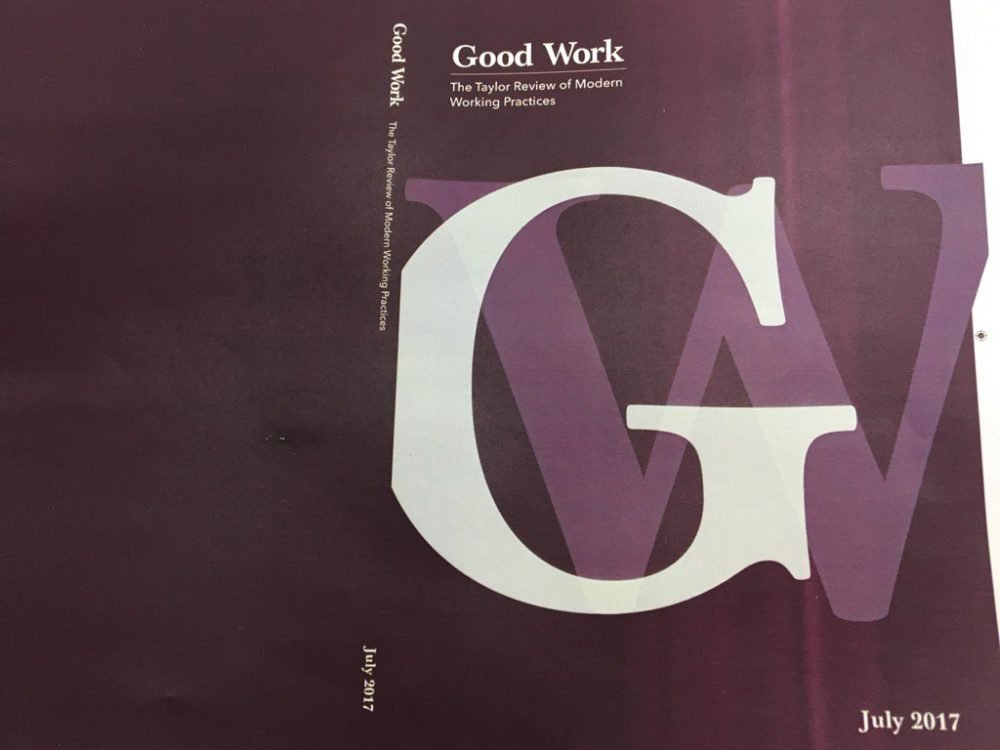 Main image: Matthew Taylor tweeted a picture of the cover of his eponymous report

So the long-awaited Taylor Report into Modern Employment Practices will, among other things, bury bogus self-employment by creating a new category of work – a so-called “Dependent Contractor”. This is an important and useful first step, but in no way the final word. Here’s why.

It is right to call time on the scandal of false self-employment.  There has been a small but growing volume of case law that has established that those work on piece-rate, zero-hours contracts for the same enterprise – and who are dependent on that enterprise for allocation of work – are “workers”  as legally defined and therefore entitled to  basic employment rights. And that their “employers” now need to start paying the National Insurance contributions their business model was designed to help them evade.

So it seems Taylor will advance this process of bringing precarious employment into line with the basic protections and rights enjoyed by employees. Obviously this makes sense ethically, but in practical terms it could create a more level playing field for businesses, lead to higher NI and Tax revenues, ensure more cash is circulating and increase productivity by stabilising an important section of the economy.

But good as this is, it will not cure the ills of our gig economy.  This is because power and choice will still be firmly distributed in favour of the employer or enterprise, rather than the newly established Dependent Contractor.

This is because there have always been two models of flexible working, and the Taylor report leaves both in place.  There is the two-way flexibility, aspired to by Taylor and experienced by those who have relatively high levels of security, are well-connected or have a skill that is in demand. There is a great, must-read analysis of this by Matt Farquharson on the excellent Motherpukka site.

Matt quotes all the things that are good about flexibility (high staff retention, lower sick leave, increased productivity) and argues passionately that more people would be more creative and productive if only employers had the skills and confidence to accommodate requests for atypical working.

Contrast that with the other model – one-way flexibility.  Here there is no control, and an almost endemic proliferation of precarious work.  Dr Andrew Smith, of Bradford University, calls them the “forgotten workers”, clustered in cleaning, catering, social care, and education and retail sectors – often having been contracted out and contracted out again from an originally large public sector employer.  Shockingly, Smith’s research has found a strong work ethic coupled with holding up to 7 jobs at any one time – and still not being able to make ends meet financially.

With technology allowing the micromanagement of activity undertaken by these soon-to-be Dependent Contracts, the idea of two-way flexibility becomes even more remote.  At a recent TUC   conference on Insecure Work, delegates were told how drivers for a very well-known general on-line retailer are checked at ten different points on the journey from collecting a package to delivering it.

Then bring in an algorithm to crunch the stats this sort of monitoring generates and suddenly you have heavily nuanced performance targets set and monitored entirely remotely. That is the reality of piecework in a digital economy, irrespective of the status of those doing it. You can see the challenge for those believing change is possible.

TUC General Secretary Frances O’Grady summed it up perfectly: “Platform businesses are pleading their special status – but it is a case of old-fashioned casualisation.”

This of course is one heavily-trailed part of the Taylor review.  We will need to see and asses what he says on other important issues such as Worker Voice. But this is definitely a case of “game on” on Britain’s dangerous addiction to poor employment standards.

Faith And Social Action: A Dilemma For Non-Believers

A Longer Look At Taylor – Is It Marmalade When We Wanted Marmite?

2 thoughts on “Taylor Report Is First Step Not Last Word”