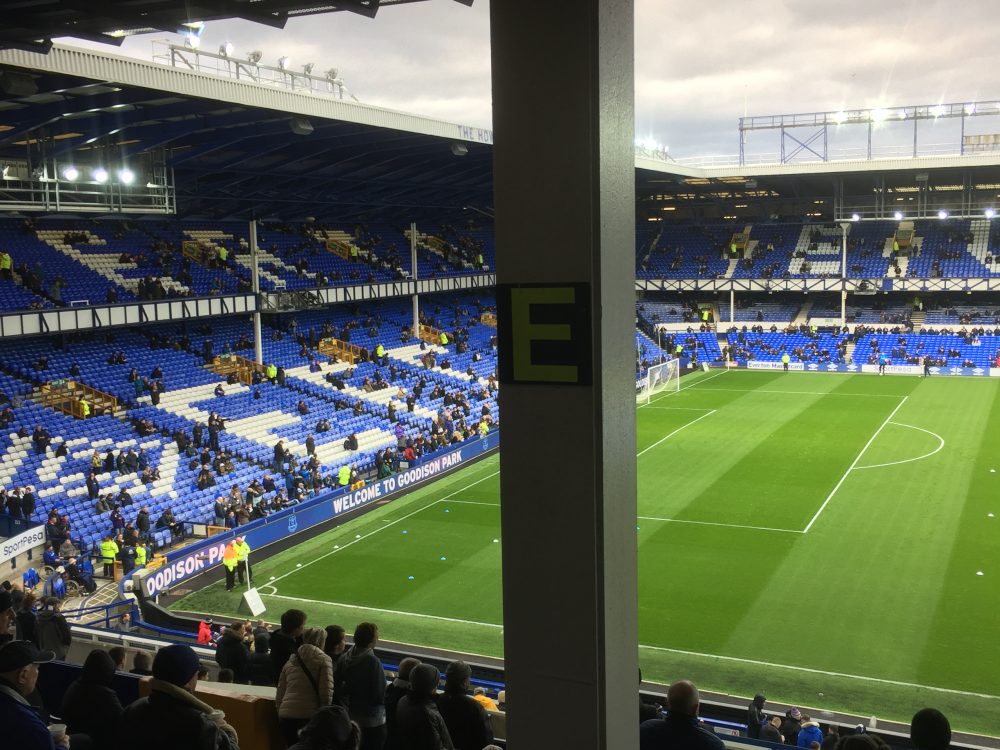 I thought you might appreciate the picture. Irrespective of your love (or not)  for “the beautiful game”, I’m sure you can see the funny (as in bizarre, rather than ha-ha) side of this, the ‘home’ end goal at Everton totally obscured by a pillar. Behind which was my seat.

Now don’t get me wrong. My favourite Premiership team, until my beloved Brentford reach that Holy Land,  is Everton. I love the atmosphere at Goodison Park. Its age and structure are a large part of the charm. The noise inside the stadium is something I’ve rarely heard replicated. And I readily accept that in such an old and distinguished ground, most views are going to be restricted to some extent.

But there’s “restricted” and then there is “totally obliterated”, and I think you’d agree my vista for last weekend’s match against Manchester City falls on the latter side the line. No VAR needed for that one.

“Come on dad, ” chided my son (safely ensconced in the Park End for this match) – “you missed nothing,” pointing out that all four goals in a 3-1 defeat were scored at the other end.

But that was just chance. It could have been very different. So I wondered what justification Everton could have for charging just shy of £44 for my seat, especially. given their proud, and largely justifiable community-orientated credentials.

Turns out they haven’t. Oh, wait – that’s not quite true. “I can advise that an obstructed view seat is defined as such when the view of all, or part of, one set of goals posts is impeded”,  and consequently £1 is deducted from the cost of the ticket. For the record, the view of the other goal wasn’t great either. So should that have been a double discount then?

Let’s face it. A quid discount is indeed a gesture, but not a positive or welcoming one. The club can afford to spend over £100m on players, pay some of them an estimated £150k per week, but doesn’t seem to have the balance right when it comes to the interests of fans.

But such attitudes – or judgement calls – are fairly widely spread it seems.  Buying my tickets for the Fulham-Brentford game on Saturday week, I was surprised to see that the Cottagers clearly feel they have already been promoted to the top flight, at least if their ticket prices are anything to go by.

And my own Brentford, to be hard-but-fair, don’t exactly roll out the red carpet for our own visitors. We are some way off the “twenty’s plenty” ceiling for away tickets established by the estimable Football Supporters Federation,  and cram them into one end with not much in the way of facilities.  Our stewards are, of course, the best in the business which is some compensation.

Two weekends in April, citing three clubs, can hardly be seen as an exhaustive study. But there does seem to be a problem with club administrators truly putting themselves in the shoes of everyone who comes to see their team, home or away, play at their grounds. If the fan experience was truly, genuinely at the heart of football, I’m sure things would be different.

(Photo of Everton’s Gwladys Street End by the author)

Footnote:  In the interests of fairness, I checked the position with Brentford:  They were admirably quick to respond, saying away tickets are priced in accordance with EFL rules and in comparison to the price of tickets in home areas of the ground, and are competitive with other clubs in the Championship. No negative feedback from visiting fans has been received (which surely bears out what I said about our stewards!).

Oh Nick Cohen – Whose Side Are You On?

UK’s Macronites To Offer Nothing New?