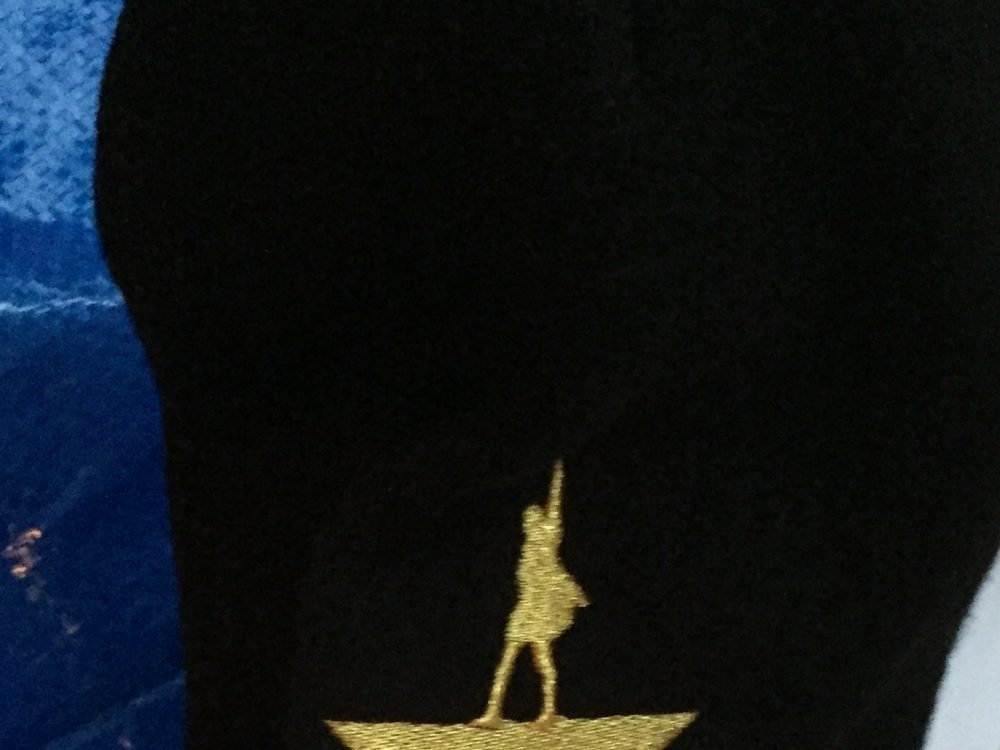 The Loudshirts blog doesn’t do reviews. But that’s never been a deliberate thing. And this week, I saw something that I need to talk about.

First though, do you know how much I hate hype? I really hate hype. That hyperbole that’s part of melodramatic multi-media full frontal assaults – must-have stuff, must-eat food, must-do things, even Christmas. Makes me go just the other way. Bah humbug to it all!

Except, sometimes, you know, the hype can be true. And that’s the case with that must-see, blockbuster, re-write the rule-book stage show Hamilton.

For those who’ve been on a desolate wasteland (i.e; no wifi/broadband) or solitary retreat, this is the story of the life and times of Alexander Hamilton, one of the US’s founding fathers, creator and first secretary of the US treasury and currently depicted on the back of the $10 note. He also self-destructed after an extra-marital affair and was the only person (so far) killed in a shoot-out (known in those days as a duel) with the Vice-President.

This dramatisation by Lin Manuel Miranda continues to sell-out in New York, has won every award going in just about every category, is 99% sung, in a mixture of hip-hop, rap, funk and ballads, has a cast that is predominantly BME, and is politically exceptionally cute, using Hamilton himself as a simile for the nascent USA and championing diversity in a time of Trump and Brexit.

But those of you who have been living in the civilised world will know all this and will have read/seen/heard of the triumphant launch of the London production, with a cast largely of fresh-out-of-drama-school never-heard-of-befores. And, dear reader, I was there at one of the very first performances. And it was stunning.

I have my middle child to thank for this. Hooked on the Broadway show, she heard it was coming to London. So we knew when ticket sales would open. And we also knew to register to be eligible for the first block to be released. And we were ready, poised over keyboards as the clock counted down to the appointed hour on 16 January.

(Just as well really. Tickets predictably sold out in an instant but the purchaser has to attend the performance and have with them proof-of-purchase, the card you used to make the purchase and photo ID. Two fingers and then some to touts and resellers.)

Given the middle one is an impoverished student, yours truly had to buy the tickets. I’d love to say I was ahead of the curve on this but in reality I was riding on her cultural coat-tails.

And boy am I glad I did. This show gripped you by the lapels from the first beat. The diction was so clear it is no loss not to have heard the songs before-hand. The wordplay is razor-sharp smart, the pace beautifully controlled, the characterisation fabulous – especially King George III (who appears like a cherubic, pompous malcontent at times of national convulsion) and Thomas Jefferson (who was, it seems, a Parisian louche-lizard with a fondness for purple frock coats. Who knew?) – and the choreography point perfect, as the Brits are defeated at Yorktown, fatal shots are fired in duels and letters and pamphlets of great importance are passed across the stage.

Above all, it is the enormous energy that envelops the audience, and even though the death of our eponymous hero is announced in the very first song, me and the other 1550 people in the packed Victoria Palace auditorium can’t look away, don’t want to look away and are willingly held captive. The combination of a great technical production based on so many cultural touchstones – even Shakespeare is referenced – is exhilarating.

But don’t take my word for it. However long you have to wait (and it will be at least six months now, unless you get lucky in the daily lottery), do go and see this. Tell me if I’m wrong.

Loss of Archives Is A National Scandal