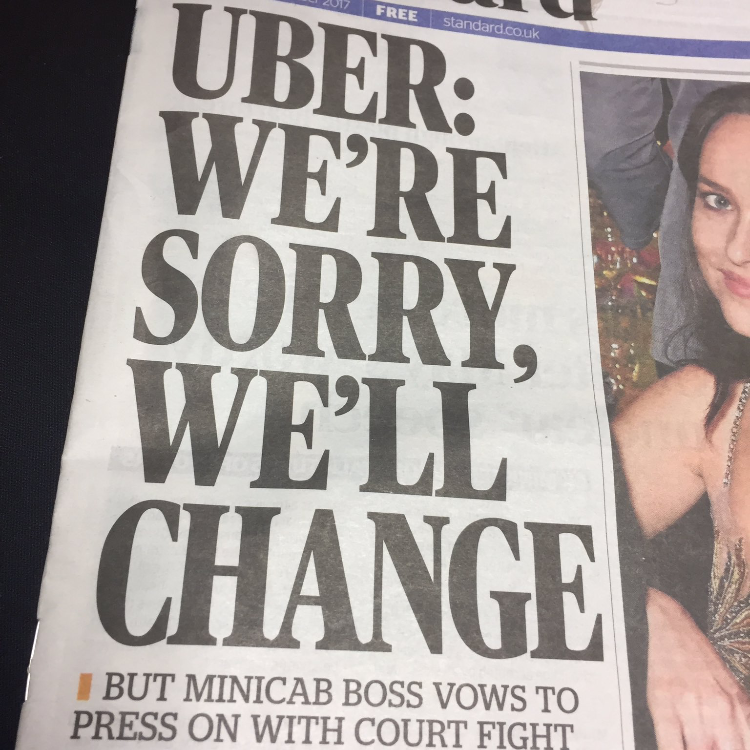 There’s a new business buzzword.    Seen it a couple of times recently and I reckon it’s the start of a trend.  It’s the application of values and behaviour embedded in us from an early age, and scaled up for commercial culture.

No, I’m not apologising – it is saying “Sorry”.  Mess up the scheduling of leave for your pilots Ryanair? “Sorry”.  Lose your operating licence because your corporate structure is too opaque to be regulated Uber? “Sorry”.  If you make a mistake, or do wrong, best to own up and apologise. It makes everything alright.

Except it doesn’t, does it?  So who exactly are Ryanair and Uber (to name but two current examples) apologising to?  And what are they apologising for? How can we tell if they are a sincere and remorseful acknowledgement of what has gone wrong – or simply a self–serving device to get off a hook before carrying on as before?

In some circumstances, however profound and/or genuine the apology, it is never ever going to be enough.  I’m sure the people responsible for the cladding on Grenfell Tower are truly sorry, but the enormity of that tragedy puts the debate into an entirely different dimension.  Southern Rail’s apologies during the hopefully-just-about-to-be-concluded dispute over staffing were so numerous and repeated that they lost any meaning. Newspapers’ phone-hacking became a criminal matter which eclipsed the apologies (very belatedly) offered.

In some circumstances the absence of an apology is telling. No acknowledgement, no recognition. No self-awareness.  Ok, we’ll note that and engage accordingly.

But if there is enough nouse to offer an apology, ought we to accept it?  Ryanair apologised to its customers, and Uber has blinked in the face of the regulator. But both have businesses to preserve and stakeholders to satisfy. It is impossible to untangle the motivations, but 500,000 petitioners (in support of Uber) show the demand for, and profit in, the interrupted service. The calculation is that it is worth apologising irrespective of the level of sincerity.

The challenge for adherents to the business-case school of apologies is that your credibility is at risk. “Sorry” doesn’t work for the same unremedied problem time after time.  So a key test of whether an apology is genuine is to see what changes have been made in systems, operation, and personnel.

Even apologies that tick these boxes may not be “good”: For example, tower blocks may be reclad with fire-resistant materials, but if the system that allowed Grenfell Tower to happen is unreformed, what’s to say that there won’t be another tragedy?

So I would propose a further fundamental test; which stakeholders have been engaged by an apology? Have their concerns been recognised and incorporated?  Specifically, have the people providing the service been brought inside the process – the pilots at Ryanair, the drivers at Uber? That’s the test of a genuine apology.  The former are unimpressed and are mobilising collectively across Europe.  The latter have had to go to court to secure basic rights.  Both companies clearly have work to do.

From an early age we are taught not only to honestly own up to our mistakes, but to “say sorry like you meant it.” Commercial organisations often seem too slow to apologise and even slower to  talk  to  their own  people to understand what has gone wrong and what needs to be done to fix things. Without the employee voice, usually expressed through trade unions, being front and centre, apologies are unlikely to be meaningful.