So the new 12-sided £1 coin is about to hit our streets. Panic at Tesco’s (who haven’t been able to convert their trolleys in time) and a source of national pride in “the most secure coin in the world”.

If you are of a certain age (or older) it is a perfect occasion to recall the last time we had a dodecagonal (12 sided to you and me) coin,  the  beloved thr’penny bit,  last minted in  1970 and condemned  by decimalisation less than a year later to the recycling mills of pecuniary history.  Yes, three old pence was one victim as 12 old pennies to a shilling migrated to one shilling being 5 new pennies. Thrupence, as it was known, didn’t map across being more than 1 np (new penny) and less than 1 1/2 np. (Yes, children, we used to have ha’pennies until 1984)

There is an obvious temptation to use today as a springboard for comparison between now and then.  No doubt someone somewhere will say that the old thr’penny bit and new pound coin are worth about as much as each other. Perhaps we might contemplate how this rediscovery of dodecagonicalism is proof positive of a bright Brexited future. For me the emotional lure of a 12 side coin is hard wired into my childhood, and a grey rainy early spring afternoon in west London.

Pocket money was a new preoccupation to the seven year old me. Introduced a year before,  and topped up with an extra allowance for sweets on Saturdays,  it was empowering as only a young person  getting actually cold hard cash for the first time can be.  There was not much to spend it on, given the sums were modest even by the standards of the day. And not much to spend either. Six or seven pence a week could keep you well stocked in those chewy sweets, sold then at 8 for a penny.  It was probably four weeks before you could get that latest Matchbox model car you’d spied on the last trip to the shops.

But, shame to say, I got a kick out of seeing the seven big one penny coins stacked on my mantelpiece on pocket money day. Sometimes it was a tanner (six old pence, a nickel coin the size of a 5p piece) and a penny.  But my favourite was when it was two thr’penny bits and a penny.  Those coins felt somehow more real more solid than the pennies or tanners.  Yes, the former was worth more and silver.  The latter was old, heavy, and historic.  But the brass coloured twelve sided discs were definitely special. Different, Had special value.  Looked like what the “white heat of technology” should mean in practice.

I had decided I need an increase.  It was simple, really, my differential had been eroded.  My younger sister had come on to the pay scale, and was close to catching me up.  My status as the senior partner needed respect and recognition. (Ok – seniority based pay bargaining has fundamental gender discrimination issues, but in my defence, I’d have taken the same stance with a brother too. And I was 7.)

The negotiations were protracted. The employer (my parents) was resistant. And it wasn’t an ability to pay situation either. No, they just didn’t think I was worth it. Actually, that is deliberately misleading spin caused by years of exposure to modern media. The truth is that they thought I wouldn’t appreciate the extra dosh.  That I would be trying  to supplement  my confectionary intake,  or that  I would fritter it away  on  things they  didn’t approve of.

On reflection, this was a crazy stand-off.  What did they think me, as an almost wholly dependent 7 years old would do with two extra pennies a week?  I was hardly about to step on a plane to Las Vegas.

By a combination of persuasion and tenacity, and thanks to some much appreciated sibling support, I won the day.  7d would be increasing to 9d and consolidated – with no reduction in sweet money.  But there was one caveat and although I didn’t want to acknowledge, it was potentially onerous – to get the extra 2d I had to commit to ”save it for a rainy day.”

The first pocket money day of the new era arrived. There on the mantelpiece – two thr’penny bits and three pennies.  That crucial ingredient of any successful negotiation, fate – was with me that day: The heavens opened. I had indeed saved it for a rainy day, and that rainy day happened to be right now.  My little victory.

I’m looking forward to seeing and holding our new coin. But more for the memories it recalls than anything else. The change it represents is inevitable, but as we stare into the unknown it is worth remembering where we have come from, what values we have in common and why shared history is important.

Next time in Tales From My Childhood:  How My Father Taught Me Gambling Doesn’t Pay. 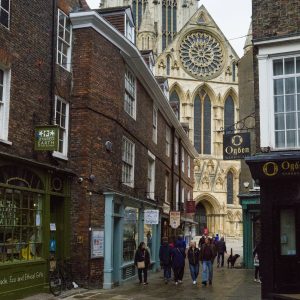 For Freshers and Their Parents/Carers Everywhere

One thought on “Back To The Future With The New £1”