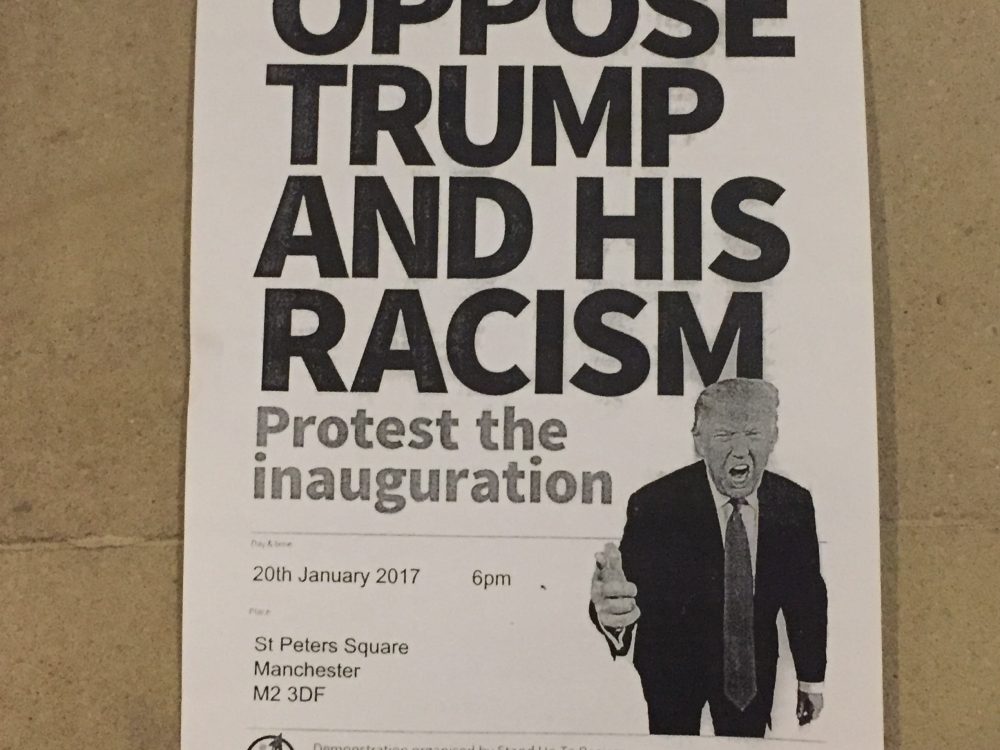 Inauguration Night saw a demonstration of several hundred in St Peter’s Square Manchester, where I happened to be. One of very many, and very understandable:  His election statements were incendiary, explicitly and xenophobic. And yet….

And yet, of course, he won.  “Down with Trump”. Is that what we are saying?  Down with the outcome of an election we lost. Down with the will of the people? Down with democracy?

We are in potentially dangerous territory here. If we are democrats, then we can’t just accept the results we like.

But of course, “we” may not all be democrats.  That shouldn’t be shocking. Didactic politics are not only the preserve of the (extreme) right.  So, fair enough, if you do not believe in democracy, there’s no problem rejecting its unpalatable outcomes.

But that’s not going to account for very many people.  So the rest of us are facing a wrestling match with our principles.

Well, refuge can be sought in a number of places: The election was fixed – most likely by Russian smears and internet interferences.  The electoral system is unfair – Hilary won the popular vote.  Votes were miscounted in key states.

All these positions would lead us to challenge the election – to call for a rerun.  That is a different tack to excoriating the victor.

Even if you accept – as most do – that Trump has torn up just about every precedent and norm in the political playbook and we are in truly exceptional circumstances, do we abandon democracy? States of Emergency and other similar suspensions of the people’s mandate are usually the work of governments under pressure and are either short-lived or a staging post to autocracy. So are we the people really saying democracy no longer applies?

But look again at the poster.  “Oppose Trump and his racism” the emphasis is added but important.  This is not about the man, nor his position as president – it is about the racism that was undeniably evident during his campaign. Other placards and posters proclaim that in the “US, Britain Everywhere, Stand Up to Racism.” That  “Black Lives Matter”. The objection here is to racism. It’s easy at present to see Trump and only Trump on the flip side of the racist coin, and understandable  how the demarcation line  between objecting to his racism and respect for a democratic process, can be blurred.

Roll forward twenty-four hours and across the UK there is a huge response by women motivated by Trump’s unambiguous sexism.

And there, in the space of those 24 hours, we see the ability of race and gender to act as a prism. To provide the common platform on which to hold the powerful to account.  What is missing from that troika is something that unites and motivates people on the basis of our shared economic experience or views about society in general.

You might call it a class-based view of the world, but whatever the label the absence of it is the crucial element in the context of our own politics.

That’s why the NHS is so important – it remains the exemplar of a shared set of views and experiences.  It’s why in London, public transport is such a key concern and touchstone.

And we have a major, almost existential problem here.  Because the UK landscape is so impoverished,   commoditised,  ghettoised, and atomised it is  hard to  identify and sustain  the very shared experiences and  values that are  necessary  for  progressive populism.

Instead, what we have is internet-driven individualism with increasing xenophobia used to explain short-comings and hardships.

Progressives recognise the challenge and necessity of recapturing populist values from the right. But thinking on how this can be achieved is still developing – or is muddled. For example, hostility to “liberal elites”, so visible in Trump’s rhetoric is seeping from the right-wing into the mainstream,  requiring contributions  from  surprising  quarters to  remind us that the left needs to expose reactionary nonsense,  not  ape it.

As talk of a “progressive alliance” gains ground, especially in the run-up to the two Parliamentary by-elections on 23 February, does this provide a hopeful way forward? I am irresistibly drawn to the Alliance Party of Northern Ireland as a loose comparator.  Would it be possible for the centre and left in Britain – or even in England – to set aside deeply established tribalism to the extent necessary to capture power?  Despite the energy and intellectual fire-power of groups like Compass, I am not hopeful.

So step forward Momentum.  Let’s be quite clear – more than half a million people joining or supporting the: Labour party is a big deal.  They didn’t split off to form a UK version of Podemos or Syriza.  There has been a clear reconfiguration of the Labour Party, whether that is to your taste or not. So now comes the crunch time, where the stated aims of this group need to be implemented and hopefully validated.  It will be big ask, even without the current internal “policy debates.”  550,000 party members, sure, but only 20,000 in Momentum (with another 200,000 registered supporters).

What is the answer? Where is our salvation? An under-explored area is the devolution debate. This is seen by some as a last refuge/fertile opportunity to build bespoke, local alliances that engage with voters and can achieve electoral success.  The down side is that devolution, certainly in England, is becoming a case of responsibility being decentralised, without the accompanying power. But I like the idea of the left in Britain almost being reinvented and rejuvenated by this city-statism (but, oh,  who will be our Garibaldi?)

But one thing is undeniable: Those few hundred in Manchester and the several tens, hundreds of thousands in London and elsewhere. These are all expressions of hope.

So let me take you back to St Peter’s Square.  The crowd is bigger now – respectable for a cold-ish Friday night and growing. Someone’s brought a big drum. A smattering of incessant whistles, and a throaty growl of appreciation for each speaker. A harbinger for the even bigger demonstrations to follow.

We the people are entitled to say to elected representatives – especially those who exert influence over our lives – racism, sexism, hatefulness, should be no part of what they say or do.

Bang that drum a bit louder, sister. So everyone can hear and join in.

#HeartUnions is here – but we need more support!